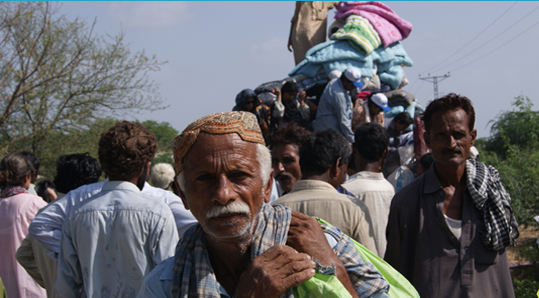 In keeping with its goals and traditions, HOPE with the assistance of its supporters made this whole-hearted, meaningful effort of going all the way from Karachi to distribute much needed ration and supplies to poor and needy families of Muzzafargarh, devastated in the recent floods and without any means of sustenance. With a formal school already in existence in Muzaffargarh, HOPE was in a much better position to control and regulate the distribution of relief goods that was brought in from Karachi.

In preparation of this important event HOPE with the help of its numerous generous supporters had gathered together a very substantial quantity of rations and medical supplies, enough to last each recipient displaced family till their safe return home and their full rehabilitation. On reaching Muzaffargarh, two areas, already identified as more seriously damaged by the floods, were selected for setting up camps for orderly distribution of the relief goods and rations. The recipients were grateful for the relief rations they received and also for much needed medicines and medical help that was dispensed to them.

In a continuous effort to provide assistance to the people of southern Punjab, severely affected by recent floods, HOPE performed a unique three-pronged activity in the region of Muzaffargarh.

1. HOPE organized and delivered ration and dry food-stuffs to as many as 600 families, all packed separately in polypropylene bags containing wheat flour, sugar , cooking oil, dry milk, tea etc. ~ enough for each family to last one month.

2. With the support of P&G, HOPE distributed thousands of sachets of P&G’s purifier of water along with water buckets and water coolers after giving the recipients full awareness and demonstrations as to the proper usage of the purifiers, storage and consumption of clean, pure water.

From amongst the countless men, women and children, the common ailments seen and diagnosed were diarrhea, respiratory tract infections, gastroenteritis, vomiting and malnutrition. As per instructions from Dr Mubina Agboatwalla medicines were provided to all  the patients and instructions and awareness was given to all for personal hygiene and general cleanliness to be able to avoid contracting recurring contagious diseases.