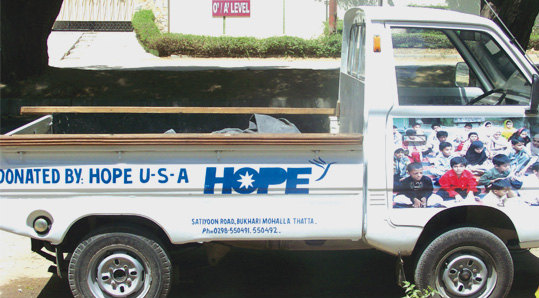 HOPE USA is a volunteer-based non-profit charitable organization working to provide urgent health and education services to the disadvantaged in Pakistan and other developing countries. HOPE USA supports health and education for underprivileged communities of Pakistan, through the schools and programs of the not-for-profit organization; HOPE (Health Oriented Preventive Education).

Atlanta Fundraiser:
The Atlanta Fund raiser was held on 12th June 2011 at the Lal Qila Restaurant. The fund raiser was attended by 100 members from the Pakistani community. A presentation on HOPEs activities was given by Dr. Mubina Agboatwalla followed by a documentary. Ms. Shakila Khurasani later enthralled the audience with her melodious voice, singing ghazals from famous artists.Los Angeles Fundraiser:
The Los Angeles Fund raiser was arranged by Ms. Maher Dadi on Sat 18th June at Marhaba Chinese Restaurant. The MC of the evening was Ms. Annie Akhter who specially came down from San Fransisco. In addition, Mr. Zafar Naqvi and Mr. Aamir Jamil also came down from San Fransisco for the occasion. Dr. Mubina Agboatwalla’s presentation on the activities of HOPE was followed by a documentary on HOPE‘s Home Schools in the northern areas. This was highly appreciated by all. Ms. Saman Nizami gave a presentation on the relief work conducted by HOPE during the floods as well as the reconstruction phase. The event culminated with a ghazal programme by Shakila Kurasani.The Bay Area Fundraiser:
The Bay Area fundraiser was held at the Mehran Restaurant in San Jose. Mr. Zafar Naqvi, Mr. Shafath Syed and Mr. Aamir Jameel worked hard to make this a very successful event. The tickets were all sold out before time and there were over 200 people in the audience. Mr. Shafath Syed effectively gave a brief history of his interaction with HOPE and what HOPE was doing on ground in Pakistan. Dr. Mubina Agboatwalla described HOPEs ongoing activities as well as the relief work during the floods. The MC of the evening Ms. Annie Akhter conducted the proceedings extremely well. The fund raising drive was heralded by Dr. Rajab Ali who inspired the audience with his enthusiasm. The addressees participated well in the fund raising drive. An Inspirational speech on development in Pakistan was given by Dr. Jabbar. This was followed by a musical evening by Shakila Khurasani.

Chicago Fundraiser:
The Chicago fund Raiser was held on 24th June 2011 at the Lal Qila restaurant. This was managed by Ms. Arshia Hasnain, Ms. Feryall Rehman , Ms, Shernaz  and  Ms. Shareen who worked extremely hard to make this a successful event as this was the first HOPE event in Chicago. Dr. Mujahid Ghazi successfully conducted the proceedings of the evening being the MC of the evening. The Consul General of Pakistan, Mr. Zaheer Khan speaking on the occasion appreciated the work being conducted by HOPE and expressed his support for the cause. Mr. Tahami Siddiqui successfully managed the IT arrangements. The media was present in full force.

The team worked tirelessly for three months planning this event, with extensive promotion through word of mouth, flyers, local media print and radio promotion, participation in and promotion through other professional and community organizations, and by building collaborative relationships with community elders.

The program was a resounding success, with almost 200 attendees, and $20k total raised through donations and promotional efforts. The program started with Tilawat from Quran by Kamran Sabir, with Mr. Abdullah Jafri and Sarah Haider Nuttall serving as Master of Ceremonies. Dr. Mubina Agboatwalla, the founder and Chairperson of HOPE Foundation, presented an overview of the HOPE Foundation’s efforts at grass-roots sustainable development in the under-privileged parts of Pakistan.

Ms. Bapsi Sidhwa, the renowned author and a very prominent local presence in Houston, was the keynote speaker. She emphasized the importance of supporting initiatives such as taken up by HOPE and implored the local community to extend all support to HOPE’s cause. The highlight of the evening was book signing by Ms. Sidhwa. The fundraising session had a few other surprises that generated a lot of interest. Items such as a hand knotted rug, a golf bag, a large mixed media print, a one-year membership from Jasna Yoga and tickets to a Ghulam Ali concert, were auctioned and raised a significant amount of money.

The musical program by Seema Shahid, Tariq Khan, and their talented team was a big hit. Seema and Tariq hit the right chord and had the audience enthralled and engaged till midnight, with some extempore singing performances the audience as well.